Miranda WHO? Orlando Bloom Already Has A NEW WOMAN!

Orlando Bloom Liv Tyler. Orlando Bloom isn’t letting any moss grow under his feet when it comes to finding a new lovelife! Miranda Kerr and OB promised their split would be amicable, you know, for the sake of their kid, Flynn, but now daddy’s got a brand new bag! And her dad is a rock star! Enter Liv Tyler. 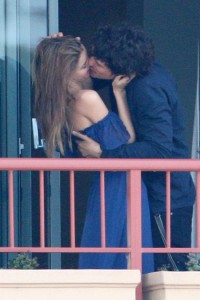 The rumor mill was right on this one! Bloom, 36, IS DATING his Lord of the Rings co-star Liv Tyler!

A source told Metro that the two got close at a premiere party for Broadway’s Waiting for Godot, which stars Gandalf himself, Ian McKellen.

“When they got behind closed doors, they were playfully tickling, gazing into each other’s eyes and holding hands,” the source said.

Good luck to the new couple!