Charlie Sheen doesn’t get it! The Anger Managment actor keeps stepping in it when it comes to tact! Judicial tact at that! Again he is insulting the person who calls the shots, in the case, literally, the JUDGE! 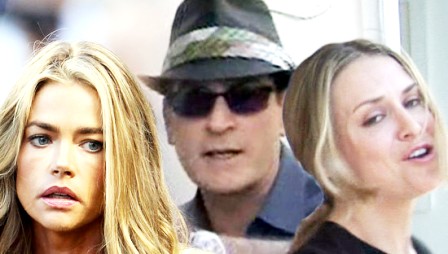 Sheen brazenly violated the judge mandated gag order in his custody case by calling the judge Mr. “I’m Italian judge anus-brain,” and threatening him if his kids are abused in the newest configuration of custody.. And he did all the jawboning ON TWITTER! And he didn’t stop there by a long shot!

“So lemme see if I got this straight … my twin boys are now in harm’s way and in grave danger, being ‘raised’ by a gaggle of incompetent and lascivious marionettes all ruled and fooled by an Adderall snorting husk called Brooke.”

The judge could jail Sheen for the infraction but that’s not stopping him from opening his big tweet over and over again!

“And guess what CPS and ‘I’m Italian’ judge anus-brain, you may have gagged me temporarily, but mark my unspoken words, anything happens to my boys, and you will get to know me, know who I truly am, a loving father.”

Yeah Charlie, you are it!