Did the White House fake this woman’s Rose Garden faint? That is a question a lot of folks are asking after a woman fell ill, almost falling on the president while he spoke about health care. 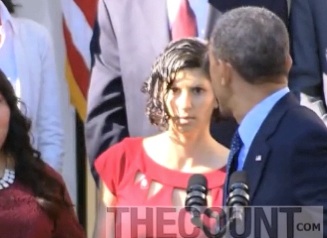 A beneficiary of President Obama’s signature healthcare law standing behind the president during his speech Monday in the Rose Garden nearly fainted toward the end of his remarks.

Karmel Allison, who was diagnosed with Type 1 diabetes according to information provided by the White House, began holding the hand of a woman standing next to her at the event and breathing deeply.

Noticing the disruption, Obama halted his remarks to turn around, just as Allison appeared to be falling backward. Another event attendee braced her from behind while the president held her arm to prevent her from falling. A White House aide then appeared to guide her inside the executive mansion.

“There you go, you’re OK. I’m right here. I’ve got you,” Obama told the woman, who was wearing a bright red dress.

“This is what happens when I talk too long,” Obama then quipped to the crowd.

The audience applauded Allison as she walked away from the event, and Obama then thanked the other attendees for assisting her to keep her from falling.

The Huffington Post and CNN identified Allison as the woman who nearly fainted. She was one of 13 individuals featured at the event, and part of a crowd that included “new registrants, small business owners and representatives from partner organizations” according to the White House.

“Allison recently began researching her options on CoveredCA and has publicly described her experience as finally feeling equal to others, including her young and healthy husband, when it comes to access to coverage,” the White House said in press materials distributed before the event.