The MTV reality star turned adult actress, got implants in 2010, a nose job and chin implant in October 2012, and another plastic surgery May 2013.. 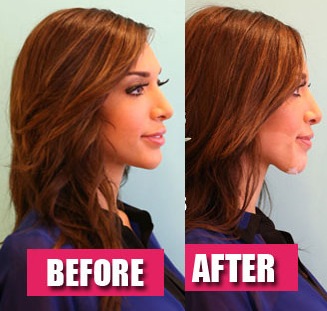 “Yes, it’s true,” Dr. Michael Salzhauer of Bal Harbour Plastic Surgery, the surgeon who performed the procedure. “We had been emailing back and forth that she was uncomfortable with the size of the chin implant. It was the smallest implant they make, so she just wanted to take it out.”

“I thought she looked great to begin with!” Dr. Salzhauer insists, revealing that Abraham buckled under pressure from her parents.

“She’d been getting some flack from her mom and dad,” he claims. “Look, a lot of times, especially when people are aware that you’ve had plastic surgery, people get self-conscious about it. I don’t think she was unhappy, she just decided to take it out. That’s one of the good things about chin implants; unlike nose jobs, they’re reversible.”

The performing doctor revealed that Abraham’s chin will never look exactly the way it used to,

“After you have a chin implant, the tissues of the chin build a little scar tissue around the implant, so there’s a little micro-boost of the chin,” he explains. “Plus, the skin is tighter. Farrah had a little bit of a roundness, kind of a double chin going on before, but now everything is nice and tight.”

“She’s super happy with everything,” Dr. Salzhauer says, insisting that Abraham’s one of his favorite patients.

“Farrah’s a nice girl,” he says. “She gets a lot of stuff, but she’s not a monster. She’s just a single mom trying to be famous! Farrah says she’s going to do a new show and go back to school. She’s doing great.”

How much money is Abraham’s going to spend to get people to notice her?