Oakland California has always been known as the seedy outskirts of San Francisco.. Proof positive as two Golden State Warriors fans were killed, shot dead in their brand new Porsche on the freeway after attending the NBA playoff game 6 at the Oracle Arena late Thursday night. They were shot dead wearing Golden State Warriors jerseys.. 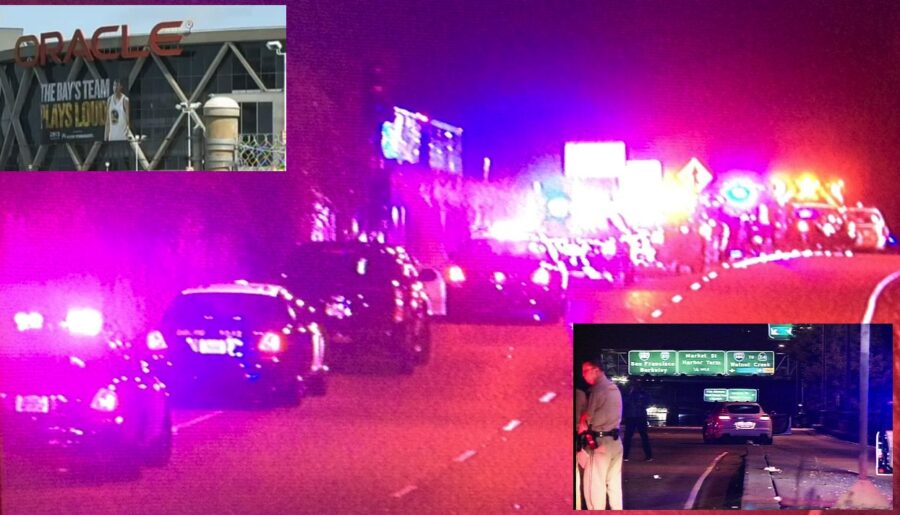 The California Highway Patrol said the shooting took place at around 10:30 p.m. and ended with the car stopping on northbound Interstate Highway 880 at Jackson Street minutes after the Warriors-San Antonio Spurs game had ended. The Spurs defeated Golden State, 94-82, ending the Warriors playoff run. When CHP officers arrived at the scene, they found a bullet-riddled white Porsche and two dead bodies.

Authorities said the passenger was also wounded in the shooting. One victim was in his 20s while the second was in his 30s. Both were from Contra Costa County.
An Oakland police investigator told KTVU the victims were believed to have come from the Warriors playoff game.

CHP investigators said witnesses have told them that a SUV drove up next to the Porsche and opened fire before speeding away.

The busy freeway, filled with fans leaving the Warriors game, was shut down for more than three hours and only re-opened at 2:34 a.m.

Oakland police said no arrests have been made in connection with the shooting and no suspects have been identified.