Green Day’s Billie Joe ‘PSY Is The HERPES Of MUSIC’

Green Day’s, Billy Joe Armstrong, does NOT mince his words, especially when commenting on music he does not prefer. No exception for emerging popstar, PSY as Armstrong ripped the ‘Gangam Style’ singer, calling the South Korean popstar “the herpes of music.” 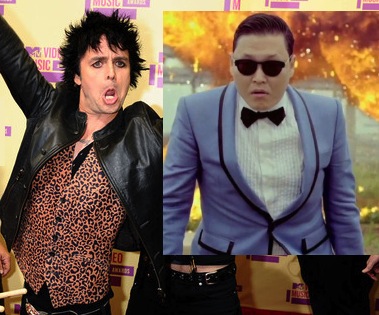 Armstrong made the comments via his Instagram account this afternoon (May 8), posting a picture of Psy alongside the caption: “This dude is the herpes of music. Once you think it’s gone, it comes back. #herpes #flareup #pleasegoaway”. Armstrong is a frequent user of Instagram but has rarely used it to pass comment on other musicians, preferring instead to share pictures of his bandmates and on the road updates. nme.

So by herpes, does Armstrong mean PSY’s music burns, itches and keeps on coming back? Might as well be a compliment..