I knew Lindsay Lohan‘s probation hearing tomorrow was serious, but I had no idea just how serious, were talking eight months in jail serious…

Our friends at TMZ are saying, Lohan should expect getting a staggering 245 days in the slammer, that is if her probation is revoked which there is a 99% chance it will be… 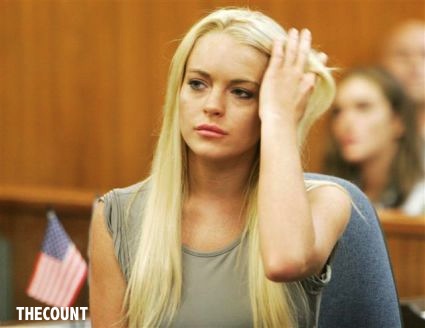 Law enforcement sources connected with her most recent case tell TMZ … when Lindsay is arraigned Wednesday for allegedly lying to cops and reckless driving in connection with her car accident last June … the judge will revoke her probation in the jewelry heist case and set a date for a hearing to formally decide if Lindsay violated the terms of her probation by breaking the law again.

We’re told the hearing will be conducted at the same time Lindsay stands trial on the criminal charges. And get this — even if Lindsay is found not guilty in the criminal case, the judge can still rule she violated her probation because the standard of proving a probation violation is significantly lower than proving guilt beyond a reasonable doubt.

The stakes for Lindsay are high — up to 8 months in jail, and that doesn’t include jail time if she’s convicted in the car accident case.

Sources tell us … the L.A. City Attorney is “out for blood” and they will file papers Wednesday asking that Lindsay’s probation be revoked. Fact is … the judge does it on her own … the prosecutors don’t even have to ask for it, but their voice will certainly be heard.