This lady’s name is “Mary Whiton Calkins,” and she was a noted early American psychologist. I think Macaulay Culkin and this woman totally resemble each other. 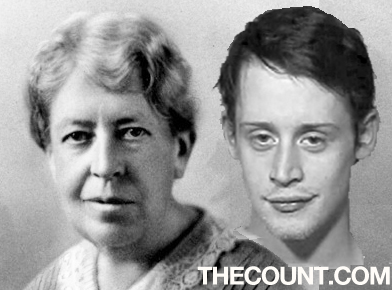 Elected one of the first female members of the American Psychological Association (APA) in 1893, she was the also elected the fourteenth, and first female, president of the APA in 1905. In 1903, less than a decade and a half into her career, she was ranked twelfth on a list of the 50 leading psychologists in the United States. In addition to a successful career as a psychologist, Calkins was an accomplished philosopher, elected to the presidency of the American Philosophical Association in 1918. Over the course of her career she published four books and over a hundred articles on both psychological and philosophical topics. In recognition of her accomplishment, the Society for the History of Psychology, Division 26 of the American Psychological Association, established the annual Mary Whiton Calkins Lecture in 1994.