World’s Largest McDonald’s in London Will Take up Half of a Football Field!

The ‘temporary’ fast-food spot, that will be made out of recycled materials, will be 32,292 square feet, which is equivalent to about half of a football field. 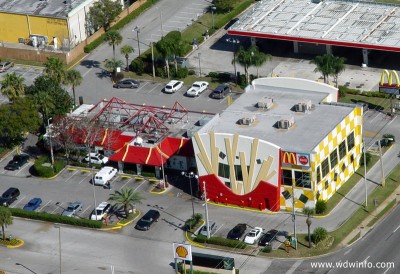 It is said that this Mickey D’s is estimated to serve more than 50,000 Big Macs and 180,000 servings of French fries during the time it is open.

McDonald’s is going to make this particular restaurant ‘aimed at making children more healthy’, and the big promotion is ‘responding to criticism of the chain’s position as an Olympic sponsor, given all the recent studies linking fast food to childhood obesity’.

The Happy Meals will have special “activity toys”. McDonald’s says “The toys will measure how many steps or jumps the user takes in a single day and encourages the child to play online Olympic-inspired games.”