WESTMINSTER, Calif. (AP) – A woman has been placed on three years of probation following her guilty plea to a misdemeanor charge of stalking actress Sandra Bullock.

A felony charge of assault with a deadly weapon was dropped against Marcia Valentine, 47, after she entered her guilty plea to stalking on Nov. 5, according to the Orange County Superior Court Web site. 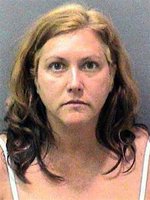 Bullock obtained a restraining order in May 2007 barring Valentine from contacting her or coming near her home, family or work for three years.

The actress testified in court that on five occasions Valentine left in her yard palm fronds adorned with “weird signs” and “pieces of animal fur.”

Bullock testified that after Valentine was spotted April 22, 2007, outside her home in Sunset Beach, her husband, Jesse James, went outside and tried to write down the woman’s license plate.

Bullock said Valentine screamed obscenities and twice tried to run over James with her silver Mercedes-Benz. James, host of TV’s “Monster Garage,” was not hurt.

Valentine was arrested the next day by sheriff’s deputies while driving in the area.