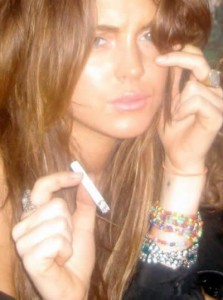 Can you say drama?  It’s usually the first word when describing Lohan these days. This time around Lohan’s house was again violated and the breakers-in were caught in video surveillance cameras.

It was papa Lohan who called cops to report the break in telling our friends at TMZ that a wall safe and some watches were taken. Michael Lohan also stated it was an “Inside job” because people that work for Lindsay failed to arm the alarm.

“I am not going to put up with individuals violating my family. Lindsay is a charitable, generous person that always gives. This is a personal violation and it has got to stop.” Said Mr. Lohan.

Lindsay wobbled home at 3 a.m. discovering the break in. It is the second such burglary in 3 months.