The Journey to Michael Jackson’s Memorial: Receiving the Golden Tickets

As you can see from our recent posts, we have been very busy all day long in attendance at Michael Jackson’s memorial at the Staples Center in Los Angeles. We have been on a mesmerizing trip for the last week since Michael’s passing. The whole entire time has been surreal and emotional. It’s been a rollercoaster for every one of Michael’s fans around the world. My next few posts will be about each part of the journey to Michael’s memorial.

I am starting off with our “golden ticket” Willy Wonka story, unto how we got tickets to Michael’s memorial today…

Yesterday on Monday, I woke up to find that I still had not received a ‘special email from the Michael Jackson memorial lottery.’ The special lottery was an email submission contest from you could enter, requesting tickets to attend his memorial that was today, Tuesday.

I then decided to write a story about people who won tickets and were NOT able to attend the memorial. A lot of rage and upset came pouring in from readers of ThecounT.com. One of our readers DID win tickets, but he was all the way in Seattle! He stated, “I won tickets but am having a hard time believing this is real. I’m in Seattle but the flights are so last minute and expensive. What to do? What to do?” Another one of our readers who did not win MJ memorial tickets but wanted to attend stated, “I hate you people who entered and can not go! You suck because it cheated real fans from going and you knew that. Thanks.” The last person that commented who I will mention, did win memorial tickets but happens to live in Massachusetts, and he was unable to fly to Los Angeles and attend the service on time. This gracious man, Eddie Graves, left a comment on our site stating that he had 2 MJ memorial tickets to give away because he could not attend.

We jumped to the offer fast and were the first people to contact him, so he forwarded us the MJ memorial confirmation to The Count’s email! (Remember this is all happening yesterday on Monday) At 2pm PCT on Monday, we won! Thank you so much Eddie! We were in! But the catch was that you had to print out the ticket voucher and take it to the Dodgers Stadium in downtown L.A., to receive the actual, real, physical tickets to get into Tuesday’s memorial service. The rules also said that you had to get to the Dodgers Stadium by 6pm and NO later! I happened to be in the middle of driving back 5 hours from Las Vegas, just finishing up my 4th of July weekend. We went into pandemonium! We frantically figured out a fast and safe way to complete this mission! So I had The Count himself forward the ticket voucher to my email, and then we coordinated a stop for me to print the voucher in a town on my way back to Los Angeles called “Victorville.” 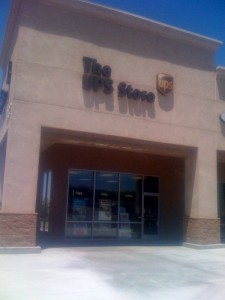 I quickly stopped at a UPS Store in Victorville off of the 15 South, and got 2 MJ memorial vouchers printed. Ben the print guy, was very helpful with getting it done in a timely manner! Thank you Ben! I jumped back into my car and then me and The Count coordinated the directions in how to get to the Dodgers stadium. I finally got into L.A. and made it into the vicinity of Dodgers Stadium. There were police, security guards and news vans on every corner! People who did NOT have printed vouchers in hand, could NOT get through beyond the first check point. I finally got through after about 7 sets of security/police and then made it to the ‘drive-thru wrist band and ticket line’! 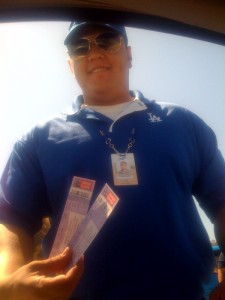 First, while I was in my car, I received a gold shiny wristband that was placed on my left wrist by the first person. They told me I had to wear it at that moment and then ‘hold on’ to the second one for my guest. I then moved up to the second person, and he gave me 2 tickets that were also required on the day of the event.

I made it out of there around 5pm! Phew! But the fun wasn’t over yet……. 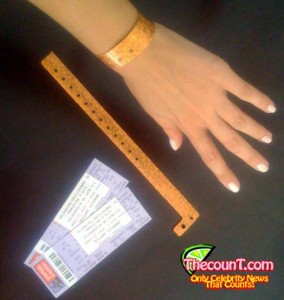 After driving for 6-7 hours on a mission to Michael from God, I then dropped my Las Vegas luggage off in Manhattan Beach, packed a new bag, and then drove straight to downtown L.A. We got a hotel at the Westin Bonaventure Hotel, just blocks away from the Staples Center where the memorial would be the next day.