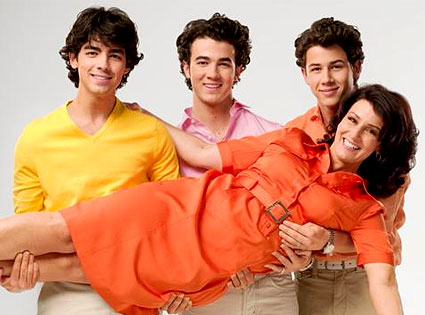 Ay Dios Mio. The Jonas Brothers train is pulling forward to the next stop on the most disastrous publicity tour of 2009.  After having their show moved to Sunday night, Joe dancing (poorly) to the Beyonce “Single Ladies” song , they have now brought their mother into the mix. The pop band who blazed up the charts and into the hearts of your kid sister are gracing the cover of the new issue of Good Housekeeping. Yikes. In the interview the Jonas mom, Denise, proceeds to speak about their sexual temptations and succeeds to speak on the behalf of her sons’ abstinence. Here’s an excerpt to illustrate my point. 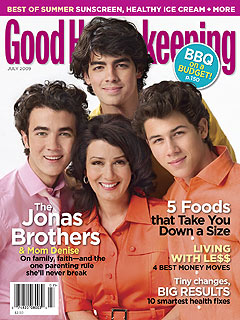 “They are men. They have desires. They have testosterone,” she says. “If they make a mistake, I’m not going to hate them.”

“I don’t think they are above or below being seduced,” she adds. “I would be foolish if I thought that. They are tested and tested, like every one of us. I pray for them.”

As for the purity rings Kevin, 21, Joe, 19, and Nick, 16, all wear, Denise says it was a private decision that’s gotten some unwanted attention.

“They’ve been criticized for proclaiming things they never proclaimed,” she says. “And what’s the criticism? They don’t want to go out there giving everyone an STD? What’s so terrible about that?”

“I try to guide them with their choices,” she says, adding that she’s not making those choices. “They have been hurt in relationships by girls. But it’s just about growing up and learning what it means to be in a relationship.”

I understand that the Jonas are good Christians and that Denise is the perfect mom. Commendable. In actuality this interview will live to become a successful punchline on the “Best Week Ever” or “The Soup”. It is ideal in these times for kids to have good  role models but skepticism is thriving and it’s hard to believe that these 3 wildly famous, attractive, young men are abstinent, especially after Britney Spears and Christina tried and burned this same trick years ago. I feel for the guys, a true product of the Disney marketing machine, just like South Park said.   I bet deep down inside one of the Jonas has always dreamed of being the lead guitarist for Slayer. Follow your hearts my dear Jonas trio. Follow your hearts.