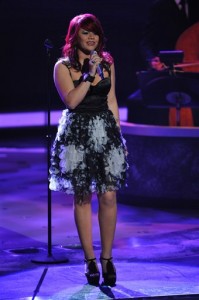 We wouldn’t have guessed that Allison Iraheta would be cut out of the 4 remaining contestants! The red and purple haired 17 year old high school rocker chick was the only girl left out of the 4. From judging last night’s ‘not so good’ and ‘weak in the rock department’ performances by Kris Allen and Danny Gokey, we’d thought for sure Allison was going to make it through tonight. As for sir Adam Lambert staying, that’s already a given

We sure love him! Slash does too! 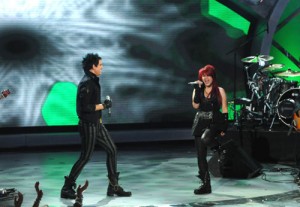 Allison and Adam’s duet of “Slow Ride” knocked everyone’s’ socks off over Kris and Danny’s duet of “Renegade.” Kris and Danny just didn’t have the strong rock charisma like Adam and Allison’s “Perfect Marriage” duet.

Her farewell performance tonight on the elimination episode was a total tear jerker. She’s so talented, young and ‘real.’ She’s just a cool girl. Almost everyone including Allison started tearing up for her encore performance of Janis Joplin’s “Cry Baby.” It was on fire! We’re pretty sure we saw Ryan Seacrest fighting back the tears! Maybe Simon too! The judges did not feel that she should leave. Unfortunately, America did not give Allison enough votes to keep her on the show. We predict her album will be out in the Fall. 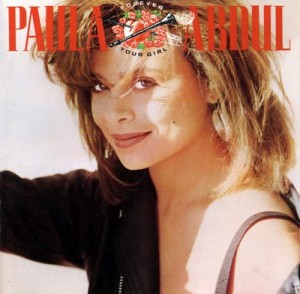 Oh and Paula Abdul’s performance was hot. She sang her new single “I’m Just Here for the Music.” Paula really displayed some killer dance moves. Especially the few parts where her male dancers picked her up into the air! She was on her A game tonight! So what if she lip synced. Britney always does! 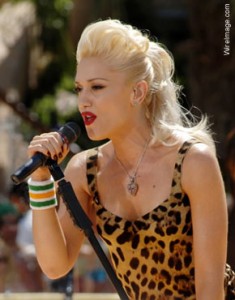 No Doubt had a hot performance singing their first big song to fame, “I’m Just a Girl.” Gwen ran all over the stage and into the audience. Her high energy took away from her vocals but it was still super fun. It’s great to see her back with the band. They are back to their original style like when they first got huge notoriety. No Doubt’s tour starts next week in Las Vegas.