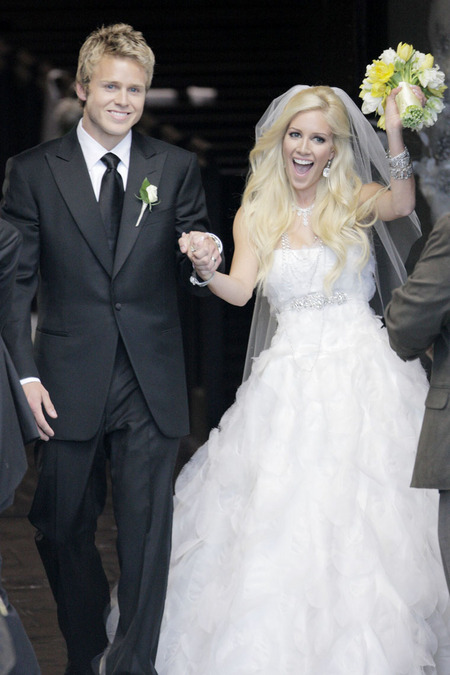 Do you remember that scene in Frost Nixon where David Frost is watching Nixon enter the helicopter on the news broadcast and exit the White House? There was a small terrified glimmer in Nixon’s eye.

…A look David Frost insisted was enough to get a full confession and spend millions of dollars he didn’t have on an interview with Nixon.

I see the same look in Spencer’s eyes. He’s saying to himself “I’ve let this go WAY TOO FAR!!”..sorry Spence… you’re married now! Have fun!

The bride wore jewels from Neil Lane, including a pear-shaped diamond floral necklace with multiple diamond chains layered over it, diamond earrings and diamond hairpins, which she picked out the day before the nuptials. Pratt borrowed a pair of diamond cuff links from the jeweler for the big day. Early Saturday, the couple arrived at the church in a white Rolls Royce Phantom. Before the ceremony, an airplane flew overhead and wrote “Spencer loves Heidi” in the sky. Pratt, looking dapper in a black suit, smiled and signed autographs for fans outside the church.

Meanwhile, Montag posted multiple updates on Twitter throughout the day. “This is going to be the best day of my life,” she wrote at one point. “Thank you God for Spencer.” She also described her wedding dress as “amazing – like a swan princess.”
After the ceremony, the newlyweds emerged and kissed on the church steps. Wedding guests threw rose petals at the couple, who left for the reception in black Rolls Royce Phantom.