Jim Carrey and Ewan McGregor were “quite” the pair this weekend at Sundance Film Festival. 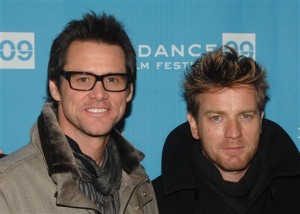 Carrey and McGregor were at Sundance Film Festival in Park City Utah for the premiere of their film “I Love You Philip Morris.”

Associated Press reported that Carrey and McGregor have a gay bromance in the movie, which includes “heavy necking.” Associated Press asked Carrey what is was like to lock lips with McGregor???

“A dream come true. I mean, look at the guy,” Carrey said, gesturing at McGregor during a question-and-answer session with the audience after the film’s Sundance premiere Sunday night.

“I Love You Phillip Morris” is based on the true story of a con man (Carrey) who meets the love of his life (McGregor) in prison, then concocts elaborate escapes and masquerades to free himself and his man.