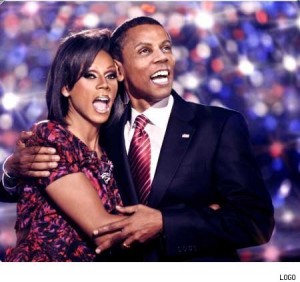 Looks like the fierce tranny RuPaul had some fun Photoshopping his head onto Michelle and Barack Obama’s ‘bodies’. Yes, that is him made up to be a woman (Michelle) on the left, and made up to be a man (Barack) on the right. Now that we think about it, those ‘bodies’ might be RuPaul’s. We love this!