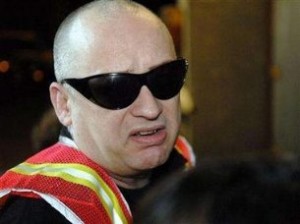 Well it seems that way. We have all seen the pictures of Boy George moping around doing community service. Here’s why.

Earlier this year the man that we know as Boy George, whose real name is George O’Dowd, denied charges that he falsely imprisoned a prostitute by chaining him to a wall in his home – in other words holding a guy hostage.

Well he denied it then but has now admitted to putting the male prostitute in handcuffs and apparently beating him as well.

The reason? The two had met up for a pornographic photo shoot according to reports, and during a second meeting Georgey boy become paranoid, suspicious that the boy was hacking into his computer and stealing the photographs.

Said Boy George during his admittance of the crime:

I absolutely admit I had him in the handcuffs, so he wouldn’t go anywhere while I checked the computer. I certainly wasn’t going to kill him, that’s hardly going to do my career any good is it?

Fortunately the man got free, by unscrewing the hook that he was handcuffed to, but the entire story is insane and leaves Boy George looking even creepier than before.

We will definitely keep you updated on this as more details become available to us, what do you think of Boy George now?